Catuxa Fernández and Ignacio Aldanondo decided to give a radical turn to their architecture studio, Losa Arquitectos, in 2012.

Being shoemakers, they would build their creations with their own hands, something that every architect at some point desires. They could still keep the “designer mindset” of their former profession – the taste for the sketching, mock-up modelling and drawing on plans. But now, in addition, they would have the pleasure of the craftsman’s manual work. From the sketch to the pattern and the prototype, piece by piece, stitch by stitch, to the finished object.

This change was made with all the respect due to the discipline. Consequently, Ignacio and Catuxa avoided taking shortcuts that can affect quality. They dedicated 2012 to 2016 to learning with two veteran artisans from Barcelona: Josep Cunillera and Carlos Piñol. With them, the training was essentially practical and was not limited, as usual, to the assembly of the shoe on last. It also included pattern making, cutting and “aparado” —or sewing of the pieces of the cut. Many workshops outsource these disciplines, but, in this case, the intention was not to have to do so, dominating the entire process from design to final execution. It took a few more months to refine the technique before being prepared to launch as an artisan workshop in 2017.

The result sought in crafts is the object that is perfect, but with soul; something that industrial production is not able to achieve. For Aldanondo y Fdez — the workshop of those two architects turned into shoemakers— the artisan profession is a path towards the synthesis of intellectual and bodily skills that Juhani Pallasmaa spoke in his book The Thinking Hand.

The focus is set on mastering the traditional technique of leather shoemaking.

The chassis with its invisible reinforcements —counter and toe puff— is what distinguishes the artisan shoes from those made in factory. It is also what provides the ruggedness, along with the most tectonic part: the shank. All these pieces are made of leather previously cut and lowered by hand with blade, including the sole and the layered heel.

Footwear craftsmanship is one of the artisan disciplines with more processes involved. Most of them are executed with specialized tools that need to be mastered. Each pattern is designed on the last in the workshop itself. After numerous tests, the many cuts are sewn with the sewing machine.

An online store and a first collection with the tittle “In Motion” were launched in august 2017. 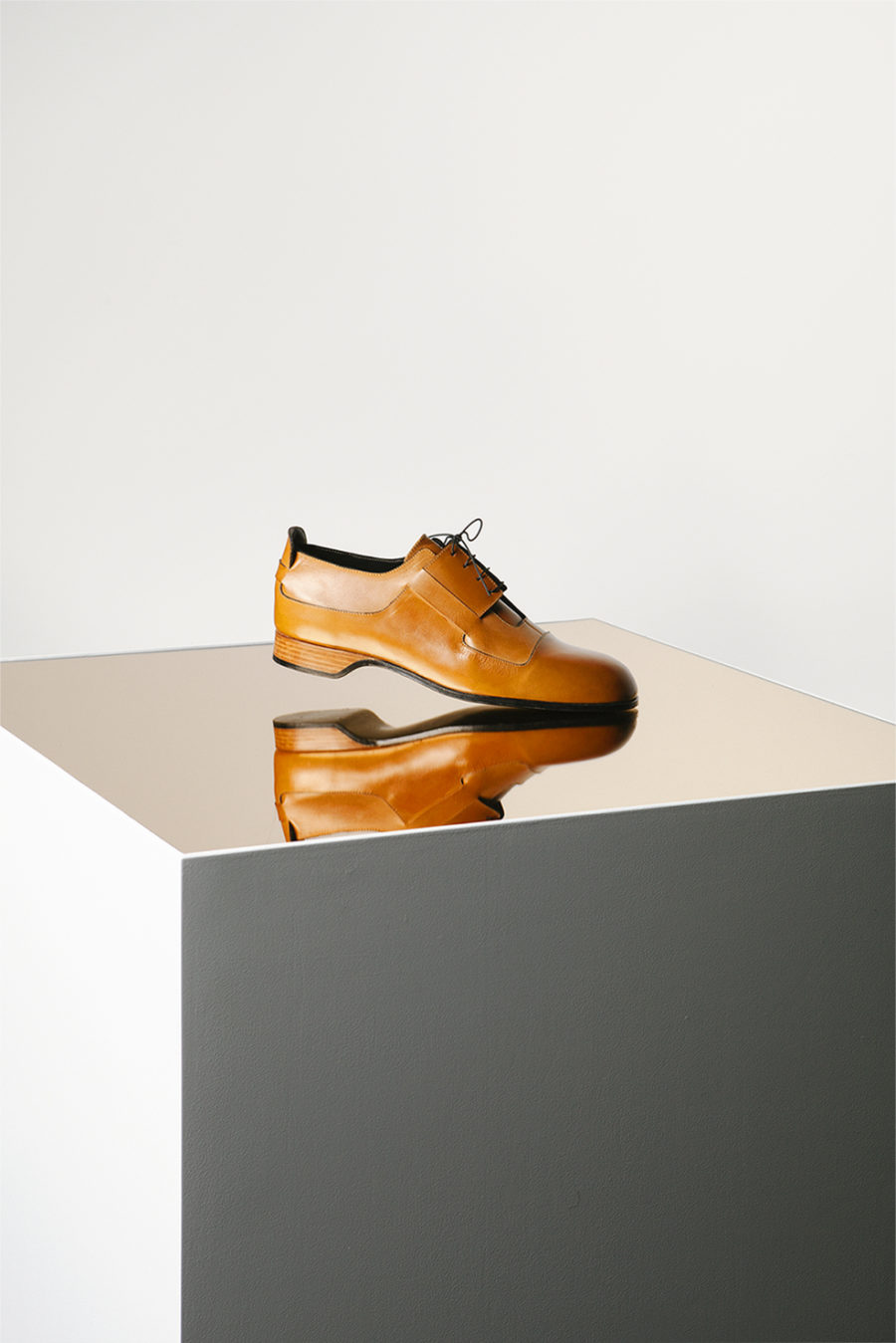 To get rid of the impositions of the seasons, elements that are merely functional as tongues or braces took centre stage becoming interchangeable. Convertible models of shoe to sandal or a cabriolet design emerged.

Since then, Aldanondo y Fdez has focused on adapting the processes of crafts to the online environment. The models of the website have been tested and designed to give good results on almost every type of foot. There is no stock and work is done upon request, which allows a high degree of customization. When necessary, customers receive graphic material to be able to take their own measurements and tell their preferences.

The proposal has been well received among an international audience that values the combination of quality and design. Orders arrive from places such as New York, London, Los Angeles or Tokyo from a buyer somewhat younger than the usual bespoke shoe customer.

As footwear collectors and design enthusiasts, both shoemakers are aware of the latest trends in fashion which they feel free to blend with traditional craftmanship.

AyF Laboratory is the most innovative side of the project together with @aldanondoyfdez. 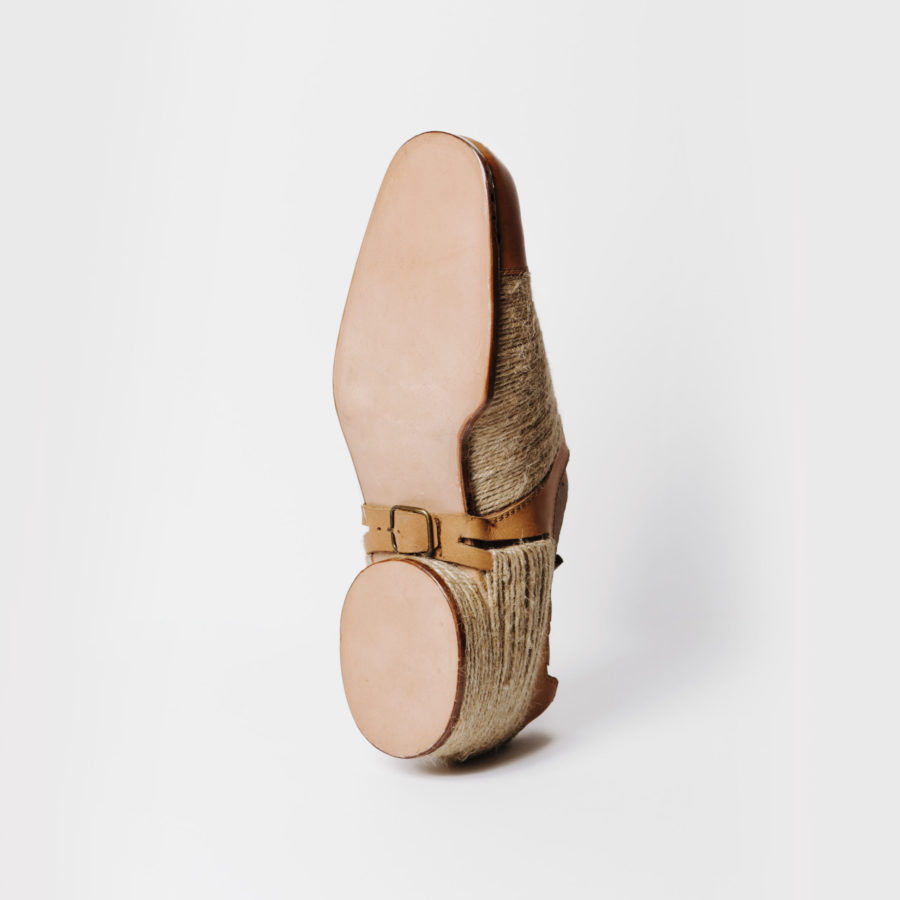 High-end artisan shoes are automatically associated with classic design for men. Aldanondo y Fdez, however, bet on contemporary design for both men and women. In their workshop, research and prototyping are constant.

AyF Laboratory is the way to refer to experimentation with designs that take technical pattern making to the limit or that introduce non-shoe materials such as metal meshes, ropes or corks that sometimes come from architecture.

While Aldanondo y Fdez avoid being pigeonholed in classicism, at the same time, they reject a discourse about innovation that reduces creativity exclusively to disruption. Experimentation here is a way to enhance the creative aspects of adaptation or maintenance through extreme quality.

Instagram has turned out to be a powerful tool to adapt craftsmanship to the digital era. Short videos with close-ups of hands cutting skins or nailing expertly on lasts have had great impact. The application is suitable to communicate the peculiar way of manual work of the artisan. The comments to the images allow to tell the story of crafts in a personal way.

Many times, this has been done by incorporating technical expressions that generate responses from other artisans sharing impressions and information. The general public has also been intrigued to know the processes involved.

Instagram also allows to take remote personalization to the next level. The app can be used, for example, to share the open process of each pair with its buyer. Many customers like to be tagged in a video where what is being made is their shoes.

Produced for & by humans

For Aldanondo y Fdez, the slow production model and the non-serialized work of handcrafts are more human.

Unlike what happens in the standardized industry, manual work is open to creativity at every moment of the process. On its reverse, this production model comes with a form of responsible consumption.

Quality craftsmanship is the opposite of fast fashion. The piece is designed and built to last almost a lifetime. Aldanondo y Fdez aspires to create contemporary classics that remain in the store or closet for years, ignoring the pressures of trends that expect what came first be discarded all the time. Luxury is understood here as honest quality, avoiding strident logos and the impositions of fashion considered as a pure trend.

Combining style with comfort is one of the obsessions of Aldanondo y Fdez. The tradition of artisan footwear has always prioritized foot health. —from the leather that is treated to promote perspiration, to the ergonomic shape of the lasts adapted to each foot. In the workshop of Aldanondo y Fdez, most of the models are flat or low-heeled shoes that seek freedom and comfort.

The Y-shaped shanks assist the movements of walking while improving comfort and health. Most models are unisex since it is understood that a large part of gender segmentation loses meaning over time. Then, details in the finishes are what give the personal touch to each piece.

Another of the intentions is to make known, as far as possible, the specialized but invisible work of footwear crafts, as is the case with “ las aparadoras”. Normally, women that are experts in their job working from their homes without any acknowledgment

Vegetable tanning from nearby suppliers tends to be used and, when possible, the materials are of kilometre zero origin, such as tanned Igualada or Banyoles or the cork of L’Empordà.

In 2017, the idea of successive disposable collections was discarded to begin working in a series.

From that moment on, new designs will be added to those that already appear on the web, with the aim of remaining for years for sale.

In the online store, they are shown in natural leather, black or a combination of both. The absence of dye in the untreated leather gives life to the shoe, which will age naturally, changing the tone over time of use. In bicolors with black, it is where the careful pattern work is especially appreciated. Then, the buyer can customize each model with tints according to their preferences. The pieces are painted by hand in the workshop to suit the client.

Recognition by the public and other artisans has been the most appreciated reward for Aldanondo y Fdez.

In 2018, La Cofradía de Zapateros de San Marcos appointed Ignació and Catuxa as “brothers” in a ceremony with the Bishop of Barcelona in the Cathedral. It was the previous step to what would come in 2019. Then, several generations of masters —from Josep Cunillera to Norman Vilalta— gathered to grant them the title of artisan master. The shoemaker’s guild of Barcelona is the oldest in all of Europe, as confirmed by a tile from the year 1202 in the cloister of the Cathedral. Catuxa and Krizia, a craftwoman who also works from Barcelona, were named the first female master shoemakers in the history of the Guild.

At the end of 2019, a new recognition would arrive for Aldanondo y Fdez. The Spanish authorities awarded them the National Craft Award in the category of Entrepreneurship.

Once acquired, the knowledge and skills of craftsmanship are meant to be shared.

Handcrafts is not understood here as an individualistic profession, but in the manner advocated by Richad Senet. That is, as a fabric in reconstruction that puts “homo faber” in the center, a figure that combines facets of craftsman, artist, designer and performer.

The renewed interest in craftsmanship of younger generations is important along with the chain transmission of knowledge and skills received. Part of the time of Aldanondo y Fdez is dedicated to teaching and training apprentices. Courses, workshops and various trainings are organized. This is also done by teaching in fashion, design and applied arts schools (IDEP, LCI); by lessons in masters of crafts such as the Barreira Art and Design School talks in business schools (Toulouse Bussines School) or with workshops for companies looking to make contact with crafts (Puig). 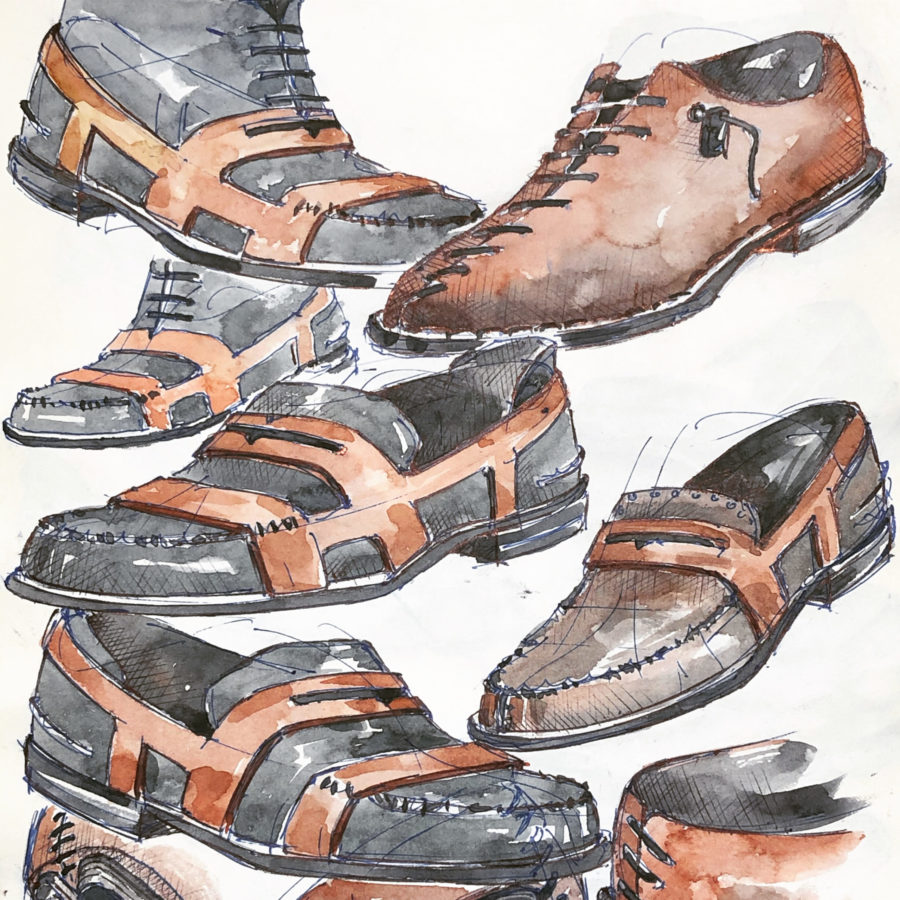